Konark Sun Temple
The magnificent Sun Temple at Konark is the culmination of Orissan temple architecture. 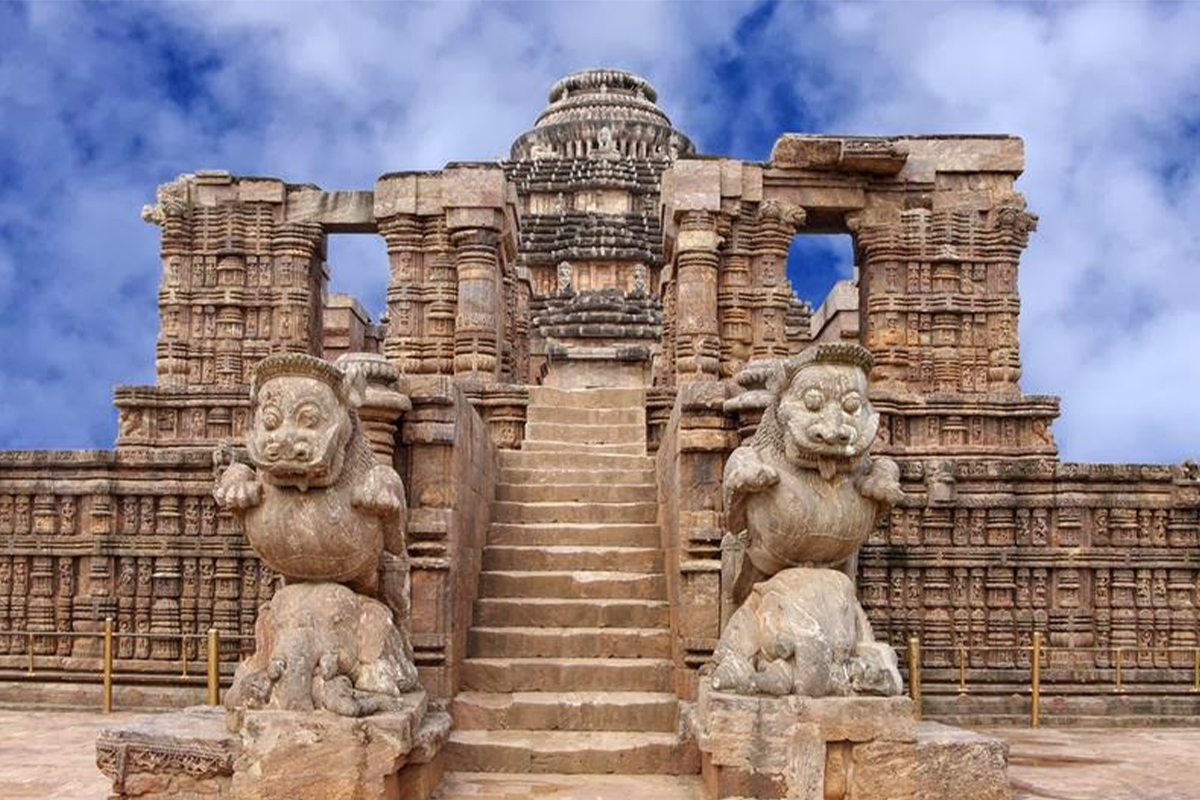 The magnificent Sun Temple at Konark is the culmination of Orissan temple architecture, and one of the most stunning monuments of religious architecture in the world. The poet Rabindranath Tagore said of Konark that 'here the language of stone surpasses the language of man', and it is true that the experience of Konark is impossible to translate into words.

I came to Puri and went on a tour for Sun Temple KONARK and then went to this hotel to have lunch. Service-Good, Ambience - Good, Food - Good, Price - Reasonable, Cleanliness - Great. An important suggestion: If you take one thali(dish/plate) food, it is enough for two persons. Think and order. Thank you.

The massive structure, now in ruins, sits in solitary splendour surrounded by drifting sand. Today it is located two kilometers from the sea, but originally the ocean came almost up to its base. Until fairly recent times, in fact, the temple was close enough to the shore to be used as a navigational point by European sailors, who referred to it as the 'Black Pagoda'. Built by King Narasimhadeva in the thirteenth century, the entire temple was designed in the shape of a colossal chariot, carrying the sun god, Surya, across the heavens. Surya has been a popular deity in India since the Vedic period and the following passages occur in a prayer to him in the Rig Veda, the earliest of sacred religious text.The idea of building an entire temple in the shape of a chariot, however, is not an ancient one, and, indeed, was a breathtakingly creative concept. Equally breathtaking was the scale of the temple which even today, in its ruined state, makes one gasp at first sight. Construction of the huge edifice is said to have taken 12 years revenues of the kingdom. 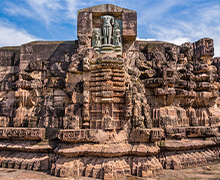 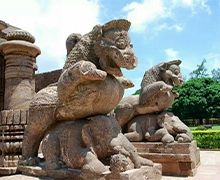 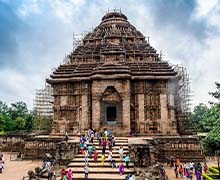 The main tower, which is now collapsed, originally followed the same general form as the towers of the Lingaraja and Jagannath temples. Its height, however, exceeded both of them, soaring to 227 feet. The jagmohana (porch) structure itself exceeded 120 feet in height. Both tower and porch are built on high platforms, around which are the 24 giant stone wheels of the chariot. The wheels are exquisite, and in themselves provide eloquent testimony to the genius of Orissa's sculptural tradition.Although their dignity sets them apart from the rest of the sculptures, it is, nevertheless, a benevolent dignity, and one which does not include any trace of the aloof or the cold. Konark has been called one of the last Indian temples in which a living tradition was at work, the 'brightest flame of a dying lamp'. As we gaze at these superb images of Surya benevolently reigning over his exquisite stone world, we cannot help but feel that the passing of the tradition has been nothing short of tragic.

Being an Odia, I feel blessed to have a visit to this historical monuments and above all after knowing the story behind it. The cravings on the stone tells us about our day to day life stories... They are very finely done.A must visit place for every one....

Konark Sun Temple (कोणार्क सूर्य मन्दिर) is a great place to visit and enjoy the beautiful architectural work of more than thousand years. The design of the artistic Temple is such that every nook and corner of the place gets sunlight and shadows of the same cannot be observed.

Konark Sun temple is a striking model of ancient artistry, fluidity of ideas, and a pedagogic treasury. Dedicated to the sun god, Surya, the first rays of the sun fall on the entrance of the temple. Much of the temple has fallen into rack and ruin but what remains still holds enough charm to captivate. An interpretation of a greater imagination, it has seen empires rise and fall, identities washed away, yet appealing to our sensorium even today.

Such an amazing experience...UNESCO world heritage site, U can't afford to miss sound and light show in the evening.